Followers of this blog know that this whole adventure began in Las Vegas as “The Vegas Vegan” a few years before I moved to Los Angeles in 2010 and I take pride in continuing to be able to write about my food adventures in Vegas. Granted a few days to ourselves, Friand and I decided to get some well deserved R&R at The Bellagio in Las Vegas, our favorite destination.
An unexpected fruit of the infamous original Sensi review was the resounding waves that rocked the Vegas vegan community. Although the comment section is lightly populated, apparently a lot of people searched different combinations of keywords “vegas”, “vegan”, and “food” and my blog appeared at the top of the Google list. Because of all the loyal minions and the new recruits, the Vegas Vegan has become a popular site. And because of your very vocal enthusiasm for the blog when visiting restaurants, we are making some pretty serious waves – including being added to several Las Vegas vacation deal sites!
If you read the original review, you’ll see a personal email from the manager, Jason Reiplinger, encouraging me to return to enjoy the Vegan Risotto that they have since added to the menu. How could I pass up an opportunity to eat the risotto again? I couldn’t. So we found ourselves making reservations during our most recent vacation to Las Vegas this past week.
Before we even hit the road for Vegas, I was in touch with Mr Reiplinger, alerting him to our plans to return and hoping that his offer to have the chef make the risotto for me would still stand! And of course hoping that I would be remembered. He responded to my email almost immediately, and was exceptionally generous in offering to make us a reservation for any time or day we wanted during our vacation. By the time we actually made it to Vegas, we were already well cared for! Arriving at the front desk Wednesday evening, Friand gave his name and we were greeted by Mr Reiplinger personally with an “It’s so nice to finally meet you!” He shook our hands and led us to our table, informing us that our server was very enthusiastic about having us!
We were seated and our server, Nick, came right over & introduced himself, told me that he and his wife (who is the vegan in their house who discovered my blog) loved the blog & because of my adventures in food, were feeling confident about asking for and expecting vegan food at just about any restaurant they went to. He had even started down the vegetarian path and told us that finding a friendly & helpful vegan community was adding to his success. Of course, how could I not be pleased by that!!
The first thing that we were told was that the chef had been preparing a Vegan Tasting Menu for me. Whoa! A Vegan Tasting Menu? Has there ever been such a thing? I’d be insane to pass that up, and Friand decided he didn’t want the same said of him, so he asked to be included in the tasting menu as well. Nick told him that a few of the dishes chef was modifying for me were originally non-vegan, and he would make at least one of those dishes in it’s original form. Let’s just say I have yet to see Friand say no to a chef’s suggestions and have seen him eat some pretty crazy things.

The tasting began with a delightful vegetable sushi roll filled with the usual suspects: avocado, asparagus, daikon, carrot and bean sprouts, topped with a few sprigs of micro-greens, with a side of a very delicious & sweet dipping sauce. Normally I do not dip my sushi in anything, but when the chef suggests you dip, you dip. And I am glad that I did.

Next course was indeed the vegan risotto – which is now listed as “Sensi Vegan Risotto” on the appetizer menu in the Italian section. The risotto was just as wonderful as I remember it – creamy and savory with a wide array of mushrooms to satisfy this mushroom addict. Mushrooms have been my obsession since I was a toddler, the tender age where kids scoff at bland things I was inhaling sauteed mushrooms by the pound. I was pleased to see that the risotto, then, included a variety of mushrooms: white & brown beech, chanterelles and enoki. So yes! The risotto was just as delicious as I remembered, and we ate every single last grain of rice on our plates.

Bring on the next course! This third course was a faux-scallop dish that I think was my favorite vegan dish at a restaurant ever. Friand was presented the original scallop dish while I was given a tofu version which was to die for! The ironic thing about this tofu-scallop is that just the evening before, while we were still home, I was trying to decide what to make myself for my dinner protein while everyone else was having scallops. I had made stir fried Chinese vegetables with ginger & tamari, Friand and my parents were having scallops with theirs and I was eyeballing the brick of tofu I had in the refridgerator trying to decide if I was going to cut the tofu into circles & cook it to look like scallops.

Well, here was the chef at Sensi doing just that & proving to me that this was a doable option. The vegan dish was a variation on the Spicy Diver Scallops, using a coconut curry and the tofu circles, topped with slices of watermelon radishes and Asian greens that have such a fresh “green” flavor that contrasted perfectly with the sweetness of the coconut sauce. I did experience that one “moment” I think all us vegans go through when eating a “creamy” sauce: is this really vegan?? That is how skilled at using coconut milk this chef was – making me question the base of the sauce! 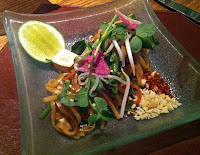 By this point, we had already eaten 3 courses and were already feeling the pressure of some very full bellies and figured that feeling indicated dessert would be on it’s way. Wrong! There was one more course in store for us! This time, a small portion of the Vegetable Pad Thai that I have come to love at Sensi. This smaller portion came with a few pieces of tofu on my plate, and Friand was given 2 very plump shrimp which he declared were the best cooked shrimp he has ever eaten. Sensi was 2 for 2 with us – we were beyond pleased or satisfied or satiated, some may say that we perpetrated a fantastic irony by ringing in the Lenten season with an extreme case of gluttony! (…if you know me and/or Friand , you know why this is ironic)

The Pad Thai came with a little pile of crushed peanuts and ground pepper which you could chose to stir into your noodles or leave separate. Clearly we have some sort of death-by-spice wish because we both stirred the pepper in and suffered greatly for it! I have never felt such a burning on my lips or on the insides of my lips!, as I did from this pepper. It took 2 days for the redness to subside, but being from Western NY, a place famous for spicy wing sauce, and Friand from Mexico, we are both accustomed to spice and a particular need to prove that it is fun to consume! 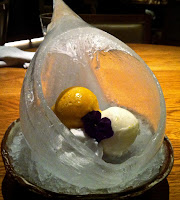 But dessert was on it’s way. Would we have enough space in our bellies for more food? Friand said that sorbet would do him well since it melts, it wouldn’t take up any precious stomach space, and of course my mind flashed to the glorious coconut sorbet that Sensi has. While we waited for our desserts, Mr Reiplinger came back to check on us, to see how our meal had been so far. Michael, our server during our first visit came by to say hello as well, and I have to admit that it was a lot of fun to get such personal and special treatment. Friand spent the rest of the evening calling me “Princess” so maybe I should change the name of the blog to “I Was A Vegan Princess” ?! (I love it!)

So what was for dessert? Friand was relieved to have been brought an ice droplet full of sorbet (coconut, lemon & mango). I’m discovering his new favorite thing is edible flowers. He confirmed, holding a scoop of coconut sorbet & the pansy on top, that the flower was edible before popping it all in his mouth. Knowing just how full he was, I was hoping he’d leave me at least a drop of coconut sorbet, but no luck. He may as well have licked the ice clean of the stuff! He did let me have a tiny taste though (it must be true love!).

I was brought an interesting dessert – something if I saw it on the menu I’d probably skip right over – but was pleased with nonetheless! When the chef suggests you eat something, you do it, no questions asked. And this was fantastic! Sticky rice with coconut milk & golden sesame seeds on a bed of sliced mango, and of course chocolate covered coconut with a mango syrup.

I thought there was no more space in my stomach, but I was wrong! There was plenty of room! I ate that whole darn thing without batting an eyelash!

Overall, another fantastic meal at Sensi. The food never disappoints, the service continues to be friendly & knowledgeable, and of course I enjoyed the extra attention we were getting all evening. It’s fun for us now to have an “our place” and to look forward to going there again.

My general observation about Sensi is that what has always been said is actually true here: the customer rules. Not with an iron fist, either, I’m not that kind of vegan, but as more & more people read these kinds of blogs, and more servers & chefs are exposed to veganism, we are all learning that not only is vegan not a “dirty word” but it can be fun. This place knows their clientele wants more options, and that new clientele is waiting just outside the door. They seem to have set aside ego for experimentation. I once compared the glass kitchen to a “zoo” but really those chefs & cooks are about as free to do as they please as any chef/owner out there.

Again, I have been able to experience art with food, how many people can say that about their last meal at a restaurant? I would liken my tasting menu at Sensi this past week to going to a concert where you get a taste of Bach, Stravinsky, and Cole Porter on the same program. Art is art, food is art, and the gang at Sensi is reminding us to never forget it!!