Road trip! Friand is experiencing a surfing renaissance this summer and I am along for the ride. Seriously: who would pass up sitting back on the sand in lovely SoCal, under the marine layer, on a perfect summer afternoon? Not this pasty freckled New York girl.

In the spirit of exploration, we decided to take a road trip to San Onofre State Beach so he could take a peek at the surfing possibilities for himself. To my delight, he spent the afternoon snapping photos of the surfers and I had fun sneaking candids of him.

The 75 mile trip was greatly extended thanks to the traffic, so by the time we arrived in San Clemente we had two hungry boys in the backseat trying to calmly ask us what was for lunch so as to not betray their death throes.

Friand & I had already done our research and decided on a restaurant called “South of Nick’s”. I blindly shoved the freshly fried chips and fresh salsa into my pie hole as I read through the menu, which you can download in pdf form either direct from that link or from their website, offers 4 vegetarian options.

One of the most difficult things about dining in a Mexican restaurant is considering whether or not removing a cheese or cream element will alter the spirit of the dish. Can’t really ask for chile relleno sin queso now can we? Thankfully, we had a server who was not only helpful, but very eager to point me in the right direction when I asked if the “Grilled Portabello Burrito” could be made vegan. This is where she took matters into her own hands and suggested I go with the “Chiles en Rajas” with the Spanish rice and black beans. She said that the white rice used in the burritos is made with butter and of course refried beans are off limits. She also pointed out that they get a lot of requests for vegan versions and they were experienced in cooking for us.

Way to go, South of Nick’s! I was just complaining on another vegan website that sometimes its the servers that stand between us and the chef, preventing us from an otherwise delicious and successful meal just because they feel inconvenienced. I wish I could remember her name, because she is a keeper!

My chiles en rajas were actually quite unique. Considering it’s a pile of grilled veggies, beans & rice, it could have been a boring disaster of mush. But not this time! 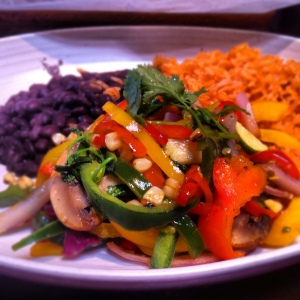 The peppers were crisp, the mushrooms cooked through, the onions sweet and the coup de grace: grilled corn. Served with house made corn tortillas, I finished every last morsel on my plate. Of course, I couldn’t resist ordering a coconut margarita (made with real coconut milk!), and I admit I finished it before I thought to snap a picture.

South of Nick’s gets 5 enthusiastic sprouts for the helpful staff and of course the delicious meal. Vegetarians will have 2 entrees to choose from, a platter and all of us veg*n variations can dig safely into the guacamole. Check out South of Nick’s next time you’re anywhere near San Clemente. Parking is a little tricky, but however far you end up walking it will be worth it.

About the featured photographer (South of Nick’s store front photo at top):