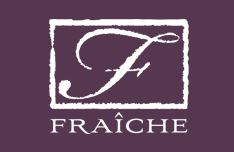 Fraiche in Santa Monica…
Followers of the blog know that I have given the (now closed) Fraiche in Culver City glowing reviews. And they absolutely deserved both reviews! After tonight, I am missing that restaurant with a vengeance.

Fraiche in Santa Monica is barely a shadow of the Culver City location. Where do I even begin?

This was a fare-thee-well dinner for my stepson “A” on his last night home before heading back to NYC for another year at Columbia University. Having had such great experiences at the Culver City location, we were all excited for dinner tonight. After arriving, we were seated promptly (thankfully we had a reservation which I’m sure helped this portion of the evening) and eagerly looked over the drink menu. We had a few minutes to look at the dinner menu. And then a few more minutes to look at the drink menu again, and then some more free time to check out the dinner menu. 15 minutes later, our waitress finally made an appearance.

I had been a waitress several times in the couple years following college graduation, so I was familiar with that feeling of not only being overwhelmed (this girl was covering 6 tables)but being brand new to the job. But, a 15 minute wait before seeing your waitress for the first time is unacceptable. What was even worse, was the next 15 minutes that followed while we waited for our drinks. In Culver City, we were always served a cutting board of warm bread with butter and olive oil for dipping. Nothing. No drinks, no bread. It was only when the runner brought our appetizers and we asked when we could expect our drinks did we finally get those cocktails. By that point, the drinks seemed like they had been sitting out too long, my “Essence of Grapefruit” was marginally cooland the fizz had all but gone out of Friand’s “Old Cuban.” 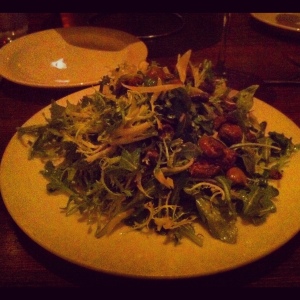 I always begin every single encounter with a server by saying “I’m vegan, which means no meat, no dairy” then continue to ask questions about particular menu items. I had absolutely no faith, as she nodded along and said “I’m not completely familiar with the menu yet, I’ve only been here 4 days.” Oh dear oh dear. I ordered the Mushroom Salad, which I have had at Culver City, and asked that there be no cheese added. When the dish arrived… yeah there was reggiano plain as day sitting on top of the salad. I instantly sent it back with the runner (who apologized profusely) and told the server that I had asked for no cheese, but it was still there. She apologized and said she’d send out another salad immediately. This time, the salad was made correctly. What can I say about the salad that hasn’t already been said before? It’s just a salad; I don’t get excited about lettuce, so at least the mushrooms were tasty.

This is where things start to take a real dive. A quick glance at the watch confirms what our grumbling bellies tell us: we’d already been at the table 35 minutes and had our appetizers, one of which had to be sent back, and one round of drinks that should have arrived within the first 10 minutes of being seated. Our patience was wearing thin. 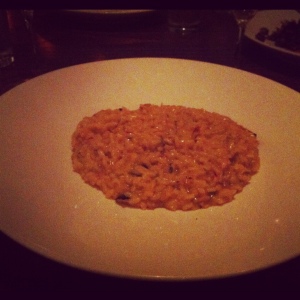 Entrees finally arrive. “A” is really the only one who received a dish that was palatable (the Monkfish). Friand’s Pork Chop was overcooked – who knows how long it sat under the heat lamp before traveling to our table. And then there was the “veggie risotto.” Clearly, it was vegetarian, but when you haven’t eaten dairy in many years, quality control becomes essential. Given the server’s stumble with the salad, my faith in the risotto being vegan was nill.

Many of us vegans know that a quick way to check for milk protein is look for “stringiness”. A dip of my fork into the risotto and then a slow lift showed me immediately this stringiness. Dairy? Another tell tale sign of dairy is a particular oiliness to the edges of the sauce. Sure, olive oil might be there, but I take no chances. I do not put any dairy into my body, so I wasn’t about to be the guinea pig. Friand took a bite and said he could not vouch for it being dairy free. So I decided to wait for our server to return, at which point I would question the possibility of dairy.

And how long did it take for her to return? Never. She never returned to our table. In fact, we sat with our untouched entrees in front of us for almost 15 minutes before I finally had the opportunity to flag down the manager. That was a useless endeavor. It was an incredibly frustrating conversation with this guy, and it’s an understatement to say that my needs, as a paying customer, were absolutely marginalized and blown off. In fact, he went so far as to say “all our vegetarian dishes include cheese, so I don’t know what to tell you.” Seriously dude? My pointed response was, “The Culver City location made vegan dishes every time I went in there.” His tune changed very quickly to “I’ll see what the kitchen can do.” At that point, Friand pointed out the inedible pork chop and was told they would send out another plate. Great. No one should ever expect anything less.

That was where my dinner ended. Not because of anything I did. Another 10 minutes passed and still no sign of our waitress. For those keeping score, we didn’t see her for a solid 45 minutes. Unacceptable. When she did return to apologize for the mix-up, Friand ordered a second drink. That was utterly pointless. That drink never arrived. But his replacement pork chop did. Solo. No risotto. At least the waitrees came back to see how the pork was, but completely avoided the issue of this particular customer who had no plate in front of her. We never saw the manager again.

Another 15 minutes went by with still no sign of our waitress or Friand’s drink, but the hostess did happen to walk past us so we grabbed her and asked for the check. Our waitress brought it to us quickly, telling us we would be comp’d the risotto and Friand reminded her that the second drink never arrived, be sure that doesn’t show up on the check either. Luckily for all involved, the bill arrived in its correct form.

There are times when waitstaff have returned to the kitchen to ask specifics about ingredients, and my experience is that they not only do it quickly, but answer very confidently once they have the answer. The wishy-washy attitude of our server did not give me any sort of hope. And the defensiveness of the manager and smugness of his “all our veggie dishes have cheese” turned my stomach.

In no way was our meal worth what we paid. I left the restaurant having been fed NO ENTREE. This is a first in The Valley Vegan‘s history. Never once has a manager left me unfed, unsatisfied and literally bursting with anger and shaking with hunger. By the time we left, we’d spend over an hour and a half, completely ignored by the staff. The best part of the evening was the runners and bus staff.

I think I need to repeat this: I was NOT SERVED AN ENTREE. No replacement for the messed up risotto. Keep that in mind. When a manager does not do what needs to be done to make someone happy, that’s a horrible sign. For those of you reading this thinking “Serves that high maintenance whiny vegan right” consider that Friand’s dinner issue was handled quickly, politely and to his satisfaction. A side-by-side comparison adds to the unacceptable behavior of all involved.

For the first time ever, I will NOT recommend any vegans go to Fraiche in Santa Monica. If you do, you do it without my endorsement. I can only hope that someone experienced a little jolt of panic when they spotted my calling card in the billfold. 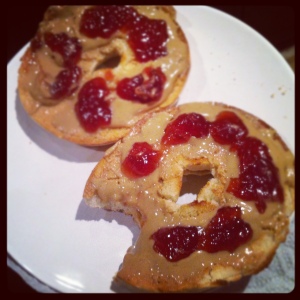 The bagel I made when we finally got home (3 hours later) never tasted so good!!

In fact, I’m not even going to put their address here.

For those of you who aren’t aware of how restaurants find out about their reviews here on my little blog, you should know that after I finish writing the entry, I immediately email the general manager of the restaurant with a direct link to just their review, and a description of what we do here at The Valley Vegan. I never write anything on this blog that I wouldn’t stand behind 100% (if you knew me in real life, you’d also know that I take full responsibility for every action & word that emits from me) and at the end of each of these emails, I sign my full name plus provide my personal email address. Usually, good or bad review, someone gets back to me within 24 hours. It’s no surprise, then, why these people run successful businesses: customer care.

This morning, I awoke to a very kind email from a representative of Fraiche, apologizing for our experience last night. I cannot say how much better that gesture alone made me feel.  I respect anyone else who faces their mistakes head on. The email gives me every hope & faith that if we give Fraiche another try, we’ll be much more satisfied with how the meal goes. I do believe that every manager and chef should be concerned with the opinions of every guest, even those of us with special dietary requirements.

I don’t believe that I should be catered to specifically, just that something like a no-dairy dish should be one of the simpler requests. I think of people with diabetes, Celiac’s, peanut allergies, shellfish allergies, etc., and how difficult dining out probably can be. Lactose intolerant and vegan diners should be on the easy end of the spectrum.

I’m looking forward to giving Fraiche in Santa Monica another shot. After all, the memories of the vegan versions of the risotto (both the “green” zucchini and the mushroom truffle) are so vivid that the pull is almost magnetic to get back there.

Thank you, Fraiche, for addressing the issues so quickly.